As most allergy sufferers will tell you, allergy symptoms can always be bothersome, turning any time of year into sneezing season. A runny nose, itchy eyes and scratchy throat can arise as the days get shorter and the leaves begin to change.

The fall can be especially difficult for people who are sensitive to mold and ragweed pollen. But these seasonal elements are not the only triggers that can make symptoms worse this time of year. There are also a few lesser-known triggers. 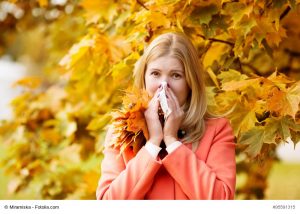 Here are four things you might not know about fall allergies, courtesy of the American College of Allergy, Asthma and Immunology:

Hay fever, a term from a bygone era, actually has nothing to do with hay; Instead, it s a general term used to describe the symptoms of late summer allergies. Ragweed is a common cause of hay fever, which is also known as allergic rhinitis. The plant usually begins to pollinate in mid-August and may continue to be a problem until a hard freeze, depending on where you live. See an allergist for prescription medications to control symptoms or to see if allergy shots may be your best option.

While most people enjoy Indian summer, unseasonably warm temperatures can make rhinitis symptoms last longer. Mold spores can also be released when humidity is high, or the weather is dry and windy. Be sure to begin taking medications before your symptoms start. Track your allergy symptoms and bring ot your visit with you primary care clinican and/or allergist to find relief.

Some folks might find it difficult to keep up with raking leaves throughout the autumn. But for allergy sufferers, raking presents its own problem. It can stir agitating pollen and mold into the air, causing allergy and asthma symptoms. Those with allergies should wear an NIOSH rated N95mask when raking leaves, mowing the lawn and gardening.

It s not only seasonal pollen and mold that triggers allergies this time of year. Kids are often exposed to classroom irritants and allergy triggers. These can include chalk dust and classroom pets. Students with food allergies may also be exposed to allergens in the lunch room. Kids with exercise-induced bronchoconstriction (EIB) may experience attacks during recess or gym class. Help your child understand what can trigger their allergies and asthma, and how they can avoid symptoms. Be sure to notify teachers and the school nurse of any emergency medications, such as quick relief inhalers and epinephrine.

No matter the season, it s important for those who think they may be suffering from allergies or asthma to see a board-certified allergist. A primary care clinician or allergist can help you develop a treatment plan, which can include both medication and avoidance techniques.

Having your allergies properly identified and treated will help you and your family enjoy the season. To schedule an appointment with a Pentucket Medical primary care clinician/ pediatrician and/or allergist call 888-227-3762 or visit www.pmaonline.com for a complete listing of clinicians.

Everyone has heard the term “textbook cases”. In recent weeks, RiverWalk allergist Bryan Stone, MD has had three such cases jump right off the page and into his office.

Last year, preparing for his allergist board recertification, Dr. Stone decided to study unusual syndromes that he’d heard and read about.

“I had a feeling these might come up on the test,” he says.

Sure enough, he encountered these topics when he took – and passed – the exam.

Flash forward a year later: his study has paid off in real terms. Within a two-week span, Dr. Stone has seen and resolved cases of some of the same rare conditions he boned up on for the exam.

The first case was referred by a non-Pentucket primary care practice. The patient was having what seemed to be anaphylactic reactions with no obvious cause. She’d seen multiple physicians who hadn’t been able to diagnose her problem. Meanwhile, she was suffering.

“She’d been using her EpiPen about five times a week,” says Dr. Stone, “each time going to the emergency room thinking she was having a severe allergic reaction.”

“I had a hunch,” he says, “and sent blood samples to our lab for a baseline tryptase test. The first result was mildly positive, but a second test turned out to be strongly positive.”

The patient, diagnosed by Dr. Stone as having mast cell activation syndrome, is now back in the care of her PCP, who is referring her to a hematologist. Things are looking up for her.

“[Mast cell activation syndrome is] not an allergy, but it masquerades as one. It’s really a cellular disorder at the genetic level,” Dr. Stone states.

While this was going on, another patient presented with ailments that mimicked allergic reaction. Again, there seemed no obvious cause. But it rang a bell that hearkened back to last year’s board exam.

Cases of hereditary angioedemas are rare – about one in 50,000 individuals. They are also dangerous: swelling around the eyes, lips, hands and feet that can be life-threatening, when restricted airways cause the patient to choke. The disease is known to be difficult to diagnose, but by process of elimination, indicators were pointing in that direction.

“All the lab tests for the better researched hereditary angiodemas came back negative, so I suspected it was Type 3,” says Dr. Stone. “There is no FDA-approved test for this problem. Diagnosis has to be made clinically. I consulted with a friend at Harvard Medical School who had seen a couple of dozen of these cases. He agreed and felt this was the only thing it could be.”

The patient was prescribed a new type of medication and after two weeks was clear of symptoms.

“So far it (the prescription) is working like a charm,” Dr. Stone says. “Which is also proof that we made the right diagnosis.”

Just a few weeks ago, yet another unusual case came in, a patient that Dr. Stone diagnosed as having urticarial vasculitis.

“It looks like hives,” he says, “but it’s not due to allergy, but to an inflammation of the blood vessels. The hives last longer and they leave dark patches. It’s an important diagnosis to make because it only responds to specific medications that are never prescribed for garden-variety hives.”

Three diagnoses of unusual cases in as many weeks has left Dr. Stone a bit bemused.

“You never know what’s going to come in on a given day,” he says. “And that’s what makes practicing medicine fun. For these cases that had shown up on my board exam to actually walk through the door at RiverWalk, that is pretty remarkable.”

Eczema is a complex disorder of the skin that causes inflammation and itchy rashes. Eczema symptoms include a dry, itchy, red rash on the face, arms, or legs, especially in the folds of the knees and elbows. Patients with eczema exacerbate the disorder by itching and scratching at their skin. Eczema triggers include food, airborne pathogens and bacterial products.

Incidence of eczema have increased significantly in the past thirty years. In the U.S. today, about 1 in every 10 infants has eczema. Studies of eczema in infants are varied, but suggest that in approximately 40% of infants with eczema, food allergies are also prevalent. In children with severe eczema, food allergy is even more prevalent. Therefore, all infants with persistent eczema should be seen by an allergist and evaluated for food allergies.

Most common food allergies in people with eczema

Of young children with food allergies and eczema, 90% have an allergy to one of the following foods:

For adults and older children, allergy-related eczema flares are more often caused by inhaled allergens like pollen and dust mites. (NOTE: Air purifiers don’t work as well to eliminate dust mite allergens because the particles are so large.)

Call 888-227-3762 to make an appointment with a Pentucket Medical Allergist today!

The proof is in the eating!

Food allergy is a clinical diagnosis. It is not a laboratory or skin testing diagnosis. The proof is in the eating, not the testing. Skin tests and lab tests are based on probabilities, not absolute certainties.

IgE (the allergic antibody) grades and classes (Class 1, Class 2, Class 3, etc.) and terms like low, mild, moderate and severe are arbitrary and may vary from one laboratory to another. Pentucket Medical Allergy does not use such subjective grades or classes.

IgE is measured in Ku/Liter, or “units”.

IgE levels that indicate a 95% chance of an allergic reaction are:

IgG is not an allergic antibody. Therefore, allergy testing with IgG is meaningless.

Testing predicts the likelihood of a reaction, not the severity. Testing can and often is falsely positive. For this reason, patients should not generally be tested for foods that they tolerate or that they have never previously eaten.

One form of food allergy skin testing, called the intradermal test, is not recommended by the American Academy of Allergy because of extremely high false positive rates and risk of reactions to the testing itself. If your allergist suggests intradermal testing for food allergies, you should seek a second opinion.

Food allergy testing cannot help with food intolerances, such as lactose intolerance. Intolerance is an unpleasant reaction to food that is NOT caused by an allergic reaction.

Remember, a patient isn’t diagnosed with a food allergy just because of a positive skin or laboratory test. If a patient is able to eat a food with no symptoms or reactions before testing, they can eat the food after testing.

Get more information, office hours and locations, and meet the Pentucket Medical Allergy team on our website!