Hypertension when left untreated is the leading cause of heart disease and stroke. Knowing your numbers is the first step in managing this treatable condition.

During the month of December Pentucket Medical is offering free blood pressure walk-in clinics at the dates/ times below. If you cannot get to one of our locations during these times, you can provide your latest BP numbers by posting them on https://www.pmaonline.com/patient-guide/patient-gateway/or calling your clinician’s office. 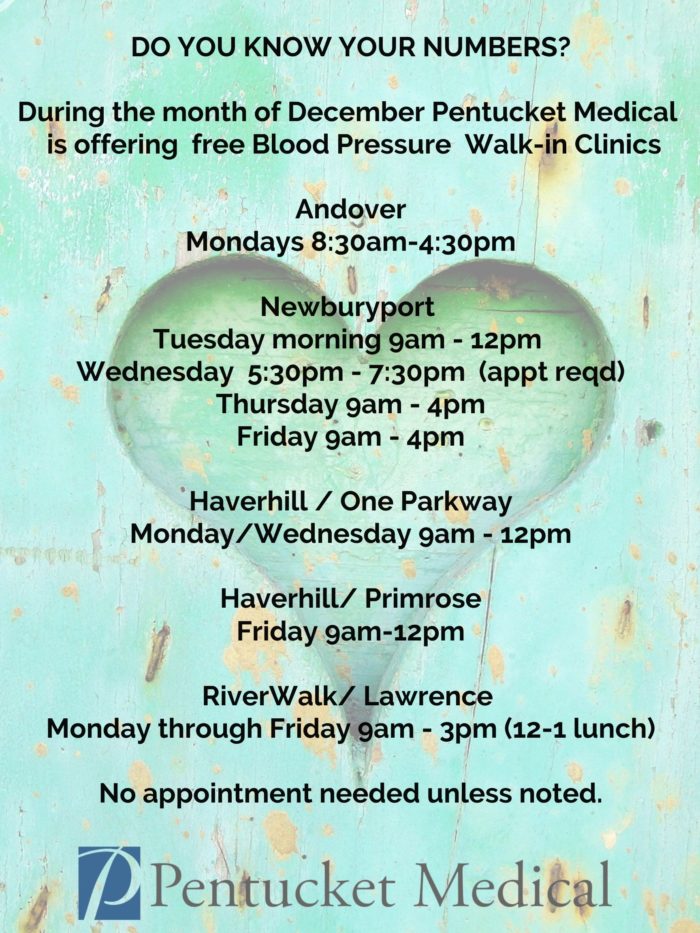 As a rheumatologist, Dr. O’Brien specializes in the management and treatment of ailments of the joints, including all kinds of arthritis, gout, osteoarthritis and lupus.

He grew up in a military family, his father a West Point graduate. After living in many locations, his family settled in Portland, ME, and Will went on to undergraduate studies and a degree from Tufts University.

After Tufts, he entered Albert Einstein College of Medicine in the Bronx.

“I explored a career in research,” he says, “but decided I wanted to work with people. Einstein has a deep focus on social medicine, and I just loved the community there. I was drawn to immunology, and systemic autoimmune diseases tend to fall into rheumatology. It’s a subspecialty that’s a good fit for me.”

After receiving his MD from Einstein, Dr. O’Brien returned to New England for a Fellowship at Brigham & Women’s Hospital. His Haverhill practice is his first out of fellowship.

Dr. O’Brien says that his subspecialty is one that relies heavily on referrals.

“As a rheumatologist I’m definitely a doctor’s doctor, we get lots of referrals from other subs. It’s a specialty that takes some humility, because we often don’t know immediately what the diagnosis is. I work with patients to get them a comprehensive, compassionate treatment plan that will get them some function.”

He is glad to be starting his medical career here.

“Pentucket is a wonderful practice and a great fit for me,” he says. “The clinical managers are phenomenal…I get the sense that the clinic is very well run, and the tools are in place for me go above and beyond what I had hoped for. The things that I have to adjust for are minimal. Carolyn (Grasso) and Renee (Antolewicz) have been able to personalize my EMR and this going to be really impactful.”

“There are lots of rheumatologists in the Boston area, but I feel the Merrimack Valley is an area the needs rheumatology.” he says. “As the population ages, this will be more and more the case. I could see developing an arthritis department at Pentucket.” 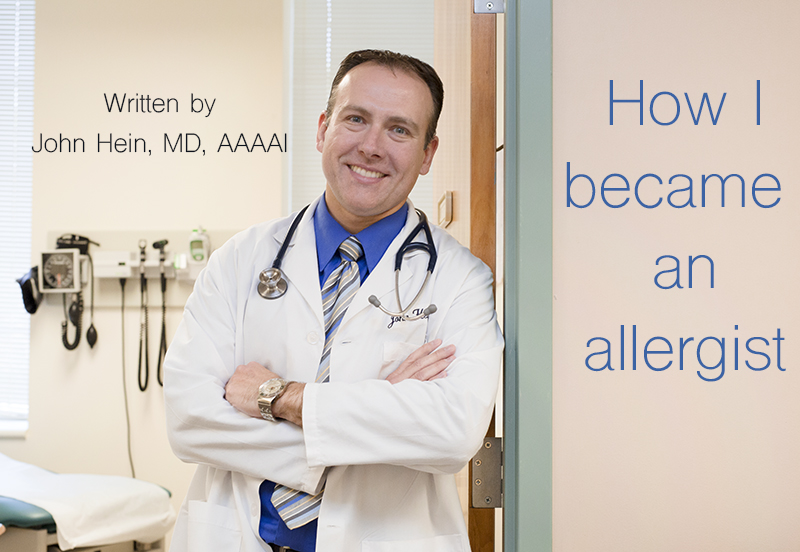 When I was in the first grade, I was having difficulty in school. I told my mother that I could not hear the teacher. A test indicated that my hearing was significantly impaired.

Further investigation revealed that my adenoids were enlarged and were affecting my hearing. As a result, my adenoids were surgically removed. During the operation it was discovered that the allergic cells in my body were extremely elevated.

My surgeon recommended that I be evaluated by an allergist.

Allergy testing showed that I was allergic to many molds and other environmental allergens.

After frequent doctor visits and treatments in childhood, my health and school performance greatly improved. And this experience opened my eyes to the career I have chosen for my life: I was inspired to pursue a career as an allergist.

I am extremely happy to be in the profession that I am today, a field of medicine in which a physician can make life-changing differences in lives of our patients. My life goal is to help others like myself, because I know from my own experience how allergies can miserably impair someone’s life.

Working as an allergist puts you in a field of work where you can actually cure people. You can really watch them go from being very sick to becoming very healthy, and it’s really gratifying as a physician to see this.

I would like to do everything possible to improve the health and quality of life of my patients.

Thinking back over four decades as a pediatrician, Dr. Sherwood Lee can only guess at the number of children who have been entrusted to his care. Some of the kids he saw in the early years of his practice are now grandparents of current patients.

On the whole, he reckons, the tally has to be in the tens of thousands. Yet of all those he has cared for, only one has returned as a clinician to work alongside him.

That former patient and current colleague is Briana Whalen, NP, now working with Dr. Lee and others in our busy Haverhill Pediatrics office, where she’s soaking up the art and science of caring for children.

Briana, who grew up in Haverhill, is the daughter of Bruce and Jennifer Franz. Following high school she attended Northeastern, earned her Master’s as a Family Nurse Practitioner, and before coming to Pentucket Medical in July of 2014 spent six years at a Mass General inpatient medical unit, where she cared for adults.

“Caring for the little guys,” Briana says, “is a big-time different world. It’s a lot different than working with adults. I am learning a lot from all of my colleagues.”

“I started my own schedule in February,” she adds. “I’m doing one physical an hour, and as I learn the ropes the pace is picking up. The support I’ve been getting here is amazing. It’s an ideal situation for someone like me.”

“We’re hearing nothing but good things,” he says. “She has a good rapport with patients, and that’s very important in pediatrics where you have to develop a bond with not only the patients but the parents, in order to get information and to do the exam appropriately.

“It takes time,” he says. “I’ve always felt that 90 percent of what you need to know as a pediatrician you can learn in the first year or so of practice, but it takes 20 years more to learn the last 10 percent.”

Briana is focused, confident and hungry to learn. It’s clear she loves the challenge.

“Haverhill pediatrics is a big practice. It’s nice to see other people’s styles,” she says. “I come home at night and go online and read up on one thing that I’ve picked during the day to look into,” she says. “Harriet Lane, that’s the pediatric bible!”

There is no mistaking the pride in Dr. Lee’s voice as he talks about his former patient and new colleague, but when asked about it he deflects the question.

“My job as a pediatrician is to make sure they grow up healthy,” he says. “It’s really the parents that set the stage. “